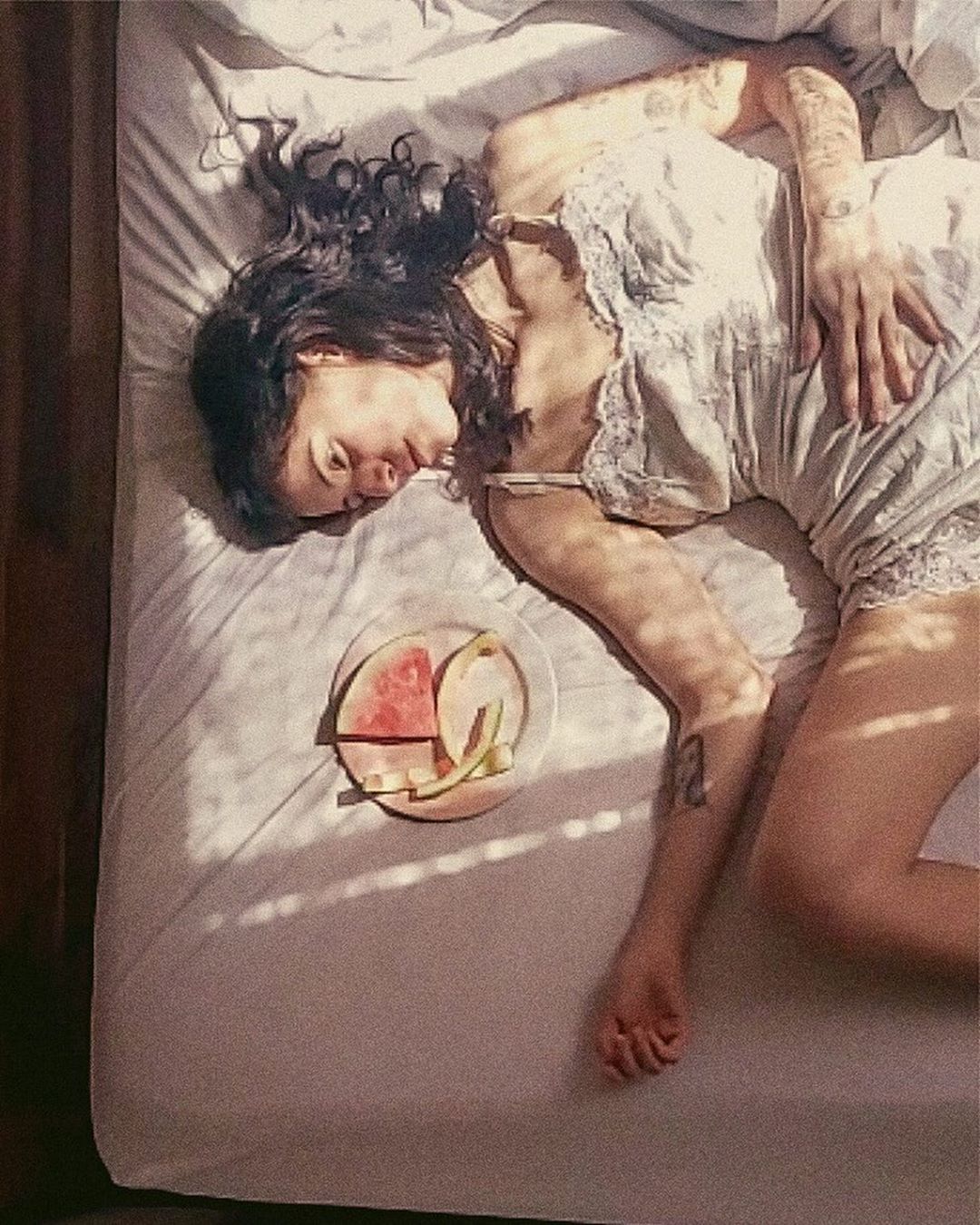 The camera sits several meters from the end of a low, wide table. The floor is a pale hardwood. The terrace is visible to the right of the screen; a balcony leads to the sky outside. Large terra cotta pots sit on the railing of the terrace and vines with open blue flowers strangle the columns. We are shooting in a mansion in LA, though it is easy to imagine we are at an Italian villa in the twelfth century.

Twelve people sit around the table which is set not for an elaborate banquet but a simple supper. The tablecloth, made of elegant silk, is a subtle gray, its pattern a tangle of white flowers. The pattern and the color mimic Isabella’s dress which is darker gray like a stormy sky and littered with golden flowers. Like a bouquet of roses thrown into thick fog. Nutshells litter the table before the man in front, Isabella’s brother, sitting across from her. The wall behind the set is plastered with wallpaper, a magnification of Isabella’s dress and dizzying.

The shot is static, framed so you can see the face of almost everyone sitting around the table. It is disorienting, this angle, each actor lined up so that they are in stark profile. They don’t seem aware that they are sitting in a group, there are separate little orbs around them. No one speaks in this scene, just Lorenzo and Isabella. One woman’s face is obscured, she sits at the far end facing the terrace. She is too beautiful, the director said, so beautiful that she will upstage the lead if her face isn’t hidden.

The left side of the table: in the foreground, Isabella’s brother sits with one muscular leg extended in front of the table, pointing his toes towards her chair. A dog is curled up beneath the green velvet of his chair, which is tipped at an alarming angle to accommodate the dog. But that’s how it has to be. Beside him is a man in a yellow gold shirt with a red tunic layered on top. He nervously inspects his wine glass, which is full of a brown liquid. For this shoot, they are using prune juice though I hear that some directors let the actors drink real wine to get in the mood. There is a falcon perched on his chair; it is making the dogs nervous. To his left is a smug looking man with straight red hair, and next to him is the beautiful woman with the obscured face.

On the other side of the table farthest from the camera and closest to the wall, a man is downing the contents of his cup. He is a heavy drinker and will die first in the movie from the poisoned wine. Next to him is a busty, prude woman in a green dress with her hands clasped across her belly. She looks straight ahead, as though she is about to make a joke but decides better of it. A man peels a pear with a small knife, a beautiful woman with dark hair raises a nut to her lips, and the man next to her dabs his mouth with a napkin. An old woman with a sheer scarf covering her head wraps her hands around her belly, in either physical or emotional pain.

Everyone is in profile except for Lorenzo, who turns away from the old woman toward Isabella, toward the camera, toward us. He hands Isabella an ornately decorated blue plate with a blood orange, sliced in half. She is lifting one half but does not meet his gaze. Behind her stands the servant, one knee cocked in yellow tights, though his red hair makes him look like part of the family. There is an air of suspicion among this group of actors, but I don’t yet know why. Perhaps they are just good actors, they are suspicious that something has been poisoned and they are right. A bowl of grapes and a plate of plums and peaches is partially hidden by the hulking figure of Isabella’s brother.

This is how the scene begins. The director for this film, a period piece, has eyes like ice and is known for his controversial tactics to infuse his scenes with a hidden air of reality. Once, he locked an actress in a room until she began to panic before releasing her into a scene.

I take note of these details, positioning for the beginning of the scene, in my mind like a list. This is a simple shot, the guests eat somberly and Lorenzo tries to convince Isabella to take a blood orange from his plate. It is my job to make sure that, from take to take, nothing has changed in case they will need to be edited together.

My official title is script supervisor, but I think of myself more like a painter. Every drop of paint has a place and cannot be changed. I have a meticulous eye for detail, but the real reason I am so good at this job is that my memory is photographic. I see each take like a new snapshot and I compare them with my eyes closed.